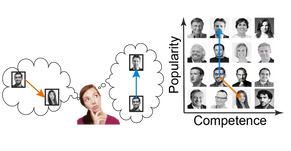 Imagine you're playing a game of poker with a stranger and the pot was just raised $200. You've got a few decent cards but with such a large sum of money you'll need some extra evidence that you might win to go on. So you look to the other players, checking for facial ticks or body language that might let you know if they're bluffing or what else they might be thinking. All the while, you're also careful to make sure that your own eyes and body language are hidden from their gaze. If they know that you're unsure about your chances, they may pounce on the opportunity to raise the pot again and get you to fold. You notice your opponent is curling his lip - just like he did the last time he bluffed - so you call and you win the pot.

This situation exemplifies many of the important social reasoning abilities at which humans are so adept. Our daily lives depend on our ability to navigate a complicated social environment by discerning what other people are thinking and tracking what they know. This complex cognitive ability - called iterative theory of mind - is  central to social life. Our lab seeks to understand the computations involved in making these assessments. For example, Boorman et al. (2016) we elucidated the neural and behavioral mechanisms which contribute to our ability to track another individuals expertise. Participants were given the option to be for or against an agent as the agent made predictions about whether a hypothetical asset would rise or drop in price. Participants were told whether the agent was a human being or a computer algorithm, received a reward if they correctly predicted whether the agent would be right or wrong about change in the asset's price.

The results showed increased increased activation in the mentalizing network, suggesting that participants were engaging in computation to understand the state of the agent. The pattern even showed that participants seemed to be simulating their own belief in what would happen in the trial as they tracked the ability of the agents to predict what rise and fall of the asset. Moreover, we found that participants treated the human agents and computer agents differently. When the agent’s prediction was the same rather than different than the participants own prediction, participants credited people more than algorithms for correct predictions and penalized them less for incorrect predictions, and that this was reflected in differential activation of neural structures. This latter point, suggest that there maybe fundamentally different computations in processing social information and applying them to make rewarding decisions.